This is a cooperative project with the U.S. Fish and Wildlife Service, Ohio Division of Wildlife, and the Observatory. The Observatory is responsible for banding a sample of the herons and egrets on the island to provide information on the dispersal of these birds. The island holds 40% of all the nesting herons and egrets in the U.S. Great Lakes. Monitoring of the population has become increasingly important due to the expansion of the Double-crested Cormorant and the resulting habitat loss. Black-crowned Night-Heron Populations have been declining on the island to well below 500 pair. They once reached a high of 1,200 pair on the island. The Black-crowned Night-Heron has been designated a bird species of concern in the Great Lakes by the USFWS. 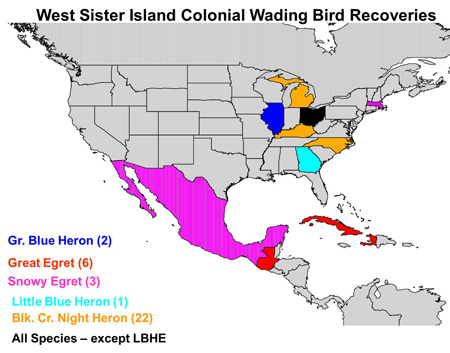