An Exciting Moment in Research! 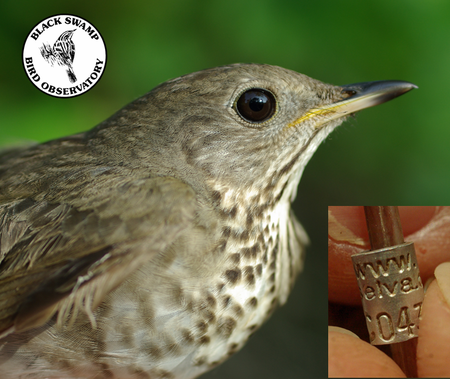 On May 18, 2015, the BSBO research team captured a Gray-cheeked Thrush that was already wearing a band. Upon inspection, they discovered that the band was from another continent! A bit of online research led us to a research team in Colombia, South America.

BSBO Research Director, Mark Shieldcastle, contacted the Colombia research team through their website, and within a matter of minutes, we had the response, below! How cool that out of 2,000 Gray-cheeks banded, this is their FIRST North American recovery!

A powerful reminder of the value of bird banding and how it helps document the routes and habitat needs of migratory birds.

Read more about this incredible bird and the research behind it, HERE.

Thank you so much for sending the details of the GCTH through and the photos. The bird was originally banded on the 21 April 2014 in the Sierra Nevada de Santa Marta in northern Colombia, in the forest reserve of a coffee farm known as the Hacienda La Victoria (11.12752 N, -74.09163 W; elevation 910 m). The bird was banded as an ASY and subsequent analysis of a blood sample taken at the time of capture revealed that the bird was a male.

This is a really exciting capture as we have now been studying the stopover behavior of GCTH in northern Colombia for six years and with over 2000 GCTHs banded this is our first recovery in North America!

We band approximately 3000 Neotropical migrants a year, so please keep an eye out for more SELVA bands and let others know that they exist.

Thank you once again,