The Lake Erie shoreline in northwest Ohio is famed as one of the best birding areas in North America, especially during spring migration. Although May is the peak season for visiting birders, spring migration is actually under way from mid-February to mid-June. Here’s an overview of what to expect at each point in the season.

Late February: Waterfowl (ducks, geese, and swans) are beginning to move, along with early returning birds like American Woodcock and blackbirds. Flocks of American Crows are moving along the lakeshore.

March 1 - 15: Waterfowl migration is fully under way. Raptor migration begins, with passage of Red-shouldered Hawk, Bald Eagle, and Turkey Vulture on southerly winds. Snow Buntings are moving around and an influx of Eastern Meadowlarks, Song Sparrows, and others is evident.

March 16 - 31: Peak waterfowl migration, with huge numbers of ducks, geese, and swans on Lake Erie and in area marshes and ponds. Raptor migration still picking up. Pectoral Sandpiper and other early shorebirds begin to appear in flooded fields. Hardy birds like Tree Swallow and Eastern Phoebe are returning. Large numbers of Rusty Blackbirds, Fox Sparrows, and Golden-crowned Kinglets are present by the end of the month near the lakeshore.

April 1 - 15: Waterfowl migration is still heavy, gradually declining through April. Raptor migration continues, with the last passage of Red-shouldered and Rough-legged Hawks. Early shorebird migrants are evident, including yellowlegs and American Golden-Plover. Big numbers of flickers, Hermit Thrushes, Winter Wrens, Yellow-rumped Warblers, and other early migrants are here, and by the middle of the month, a sprinkling of other warblers turns up. Fox Sparrows are still numerous, and many other migrant sparrows are arriving.

April 16 - 30: First arrivals for many species, including Neotropical migrants like warblers, vireos, and orioles. Early warblers like Black-and-white, Palm, Nashville, and Black-throated Green are numerous by month’s end. In migrant traps along the lakeshore, this is the best time to find Pine and Orange-crowned Warblers, and a time when “southern” warblers like Worm-eating, Hooded, and Yellow-throated may appear. Typical migrants in this period include Yellow-bellied Sapsucker, Ruby-crowned Kinglet, Blue-gray Gnatcatcher, and sparrows such as Swamp and White-throated. Herons, egrets, and rails have their main arrival here. Raptor migration features Broad-winged and Sharp-shinned Hawks and Osprey. Shorebird variety and numbers continue to increase.
May 1 - 10: Sometime in this period, weather conditions will produce the first really massive arrivals of Neotropical migrants. In the migrant traps along the lakeshore, warbler counts may jump from about a dozen species to nearly 30 species literally overnight, and other Neotropical migrants will abruptly pick up in numbers and variety also. After this big wave, numbers of individual migrants will drop off between successive waves of arrivals, but diversity will remain high through most of May. Early migrants like Rusty Blackbird and Fox Sparrow are mostly gone before May 10th. Migration of raptors and waterfowl is winding down, but shorebirds are still building toward their peak.

May 11 - 20: Numbers of migrants will vary day to day depending on weather, but diversity is very high during this period. Amongthe warblers, earlier migrants like Palm and Yellow-rumped are declining, but later ones like Magnolia, Blackpoll, and Bay-breasted have arrived in numbers.  Cuckoos, Ruby-throated Hummingbird, Indigo Bunting, and Bobolink are all typical mid-May migrants. Hermit Thrush is past its peak but the other thrushes are abundant, and flycatchers are arriving. Diversity and numbers of shorebirds are excellent in available habitat.

May 21 - 31: Some days continue to produce very high numbers of migrants, although they are harder to see with the trees fully leafed out. Summer residents are singing but there is less song now from migrants, since females (which generally don’t sing) tend to migrate later than males. This is the peak migration time for the elusive Connecticut Warbler, and good for numbers of other late migrants like Mourning, Wilson’s, and Canada Warblers and American Redstart. Yellow-bellied, Alder, and Olive-sided Flycatchers all peak in late May, Red-eyed Vireo can be abundant, and thrush migration continues to be excellent. Many shorebird species are now at their peak numbers. 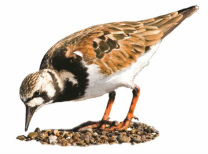 Early June: Farther south in Ohio the songbird migration is mostly over, but in the migrant traps along the lakeshore, stragglers of many species can be found through the first week of June. Some birds, such as Swainson’s Thrush and Yellow-bellied Flycatcher, are still present in numbers. Shorebird migration is still in full swing, with Dunlin, Ruddy Turnstone, and other species still expected, and White-rumped Sandpiper probably at its peak.
© 2021 www.bsbo.org
All rights reserved