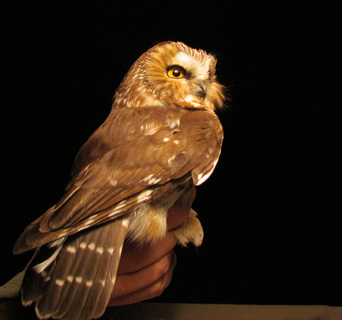 Reports
To identify spring and fall migrational timing of Northern Saw-whet Owls near the western basin of Lake Erie and to contribute to the eastern U.S. database on the species.

The Saw-whet Owl is Ohio’s smallest owl as well as it’s most migratory. Little was known about the species migration until the late 1990s when Operation Owlnet (www.projectowlnet.org) was initiated. That program began with five Saw-whet Owl banding stations in Maryland and expanded across the entire country.

The capture protocol of Project Owlnet is utilized by BSBO researchers for this project. Saw-whet Owls are captured at a trapping site along the western basin of Lake Erie in southern Michigan. Birds are captured in mist nets with the aid of tape playback calls. Playbacks are utilized to increase the sample size by attracting migrating birds to a central location. Nets are open and run from sunset to sunrise when conditions are right. Minimum attempts are conducted within two hours of sunrise and sunset. Captured birds are banded with a federal leg band, aged, and energetic condition examined.

Primary migration periods have been identified as October and November in the fall and March and April in the spring.
© 2022 www.bsbo.org
All rights reserved